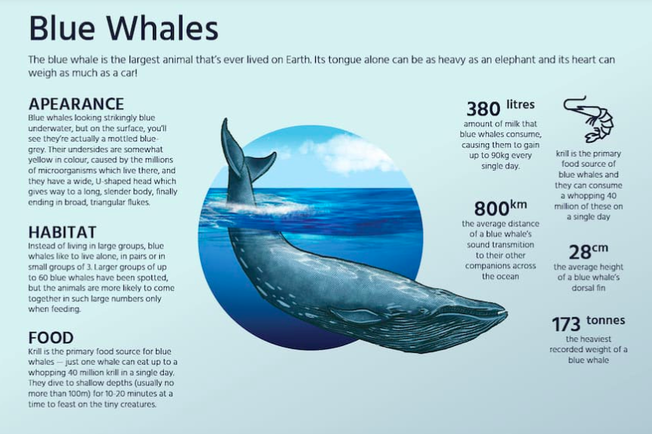 The Blue Whale is the biggest animal that has ever existed on earth. The largest individual on record is 33.6 metres in length and a weighed in at more than 190 tonnes. Some individuals can reach more than 90 years old which makes them one of the longest living mammals also. They previously lived in the majority of the earth's oceans, until the beginning of the 19th century where they were hunted on a grand scale, reducing numbers and breeding significantly. Before whaling of this species began the largest population was estimated to be approximately 239 000 individuals, today they're considered as an endangered species as there are now only roughly 5000-12000 individuals left in total. Nevertheless Japanese whalers are still hunting these amazing creatures under the false pretence of scientific research to sell the meat commercially in restaurants and supermarkets.

​Other Information
​
Breathing sequence: Up to 20 shallow dives at intervals of about 20 seconds, followed by a longer deeper dive of up to 30 minutes.